Venezuela: from Punta de Mata to Lima, chronicle of an exile

Photo report on the life of Alexander, a Venezuelan forced into exile to escape the extreme misery in his country. Here, to the left of the photo, Alexander is in one of the buses to Perú where he decided to emigrate at the end of 2017. More than 4,700 kilometers long, the trip between Punta de Mata (his hometown) and Lima the trip takes five days minimum depending on the hazards at the borders (Venezuela, Colombia, Ecuador, Peru). The United Nations High Commissioner for Refugees estimates that there are 353.000 Venezuelan refugees in Peru, and more than 2.3 million who fled Venezuela (source: UNHCR, 2018).

See my portfolio “From Punta de Mata to Lima, chronicle of an exile” and discover the unpublished testimony of Alexander.

With the collapse in oil prices in 2014, since then Venezuela, which earns 96% of its revenue through crude oil sales, has been experiencing an unrestrained economic crisis. Hyperinflation comes with a record recession too, in the space of 3 years Venezuela saw its growth rate fall down by 46.5% !

According to economist Alejandro Werner, IMF director for Latin America, with such figures “the situation in Venezuela is similar to that in Germany in 1923 or Zimbabwe in the late 2000’s”.

The corollary of this extraordinary economic crisis is a dramatic social and human situation: a decrease in purchasing power and therefore an increase in poverty of almost all the population; a feed shortage problem and consumer products; a shortage of generic medicines, medical equipment, and reduction of healthcare personnel in hospitals; rising unemployment; an increase in prostitution; an increase in drug trafficking; an increase in crime, including the highest homicide rate in the world…

The scale of the present Venezuelan crisis is such that the state in power is no longer able to maintain public services and infrastructures, electricity and water cuts for several days became frequent throughout the country, including in Caracas the capital city. The petroleum refineries are becoming progressively outdated too. Local airline companies also stopped internal flights in Venezuela and they cut international seats by 80%.

Following the death of Hugo Chávez, the president and instigator of the “Bolivarian Revolution” on March 5, 2013, Nicolás Maduro becomes president of Venezuela on April 14, but his election is very controversial and his political regime strongly criticized. In August 2017, French President Emmanuel Macron described Venezuela’s political party in power as a “dictatorship”, following a series of government’s opponents and street protests from April 1, 2017, which have killed nearly 130 people. The local elections were finally won by Nicolás Maduro’s GPP (Great Patriotic Pole) parties, but everybody is unanimous in denouncing this flawed election with many irregularities (including the ousting of the opposition coalition’s vote…). Antonio Ledezma, the former mayor of Caracas and leader of a political party in opposition, has been accused of conspiracy by Nicolás Maduro and he has been living in exile since 17 November 2017 due to fears of reprisals.

Most recently, on April 3, 2018, Emmanuel Macron made some statements concerning the conditions of organization of Venezuelan presidential election on 20 May 2018, by still denouncing the political regime of Nicolás Maduro and deploring repeated attacks on the rule of law and human rights in Venezuela that do not allow, as it stands, a fair, free and transparent vote. Into what Nicolás Maduro replied at a press conference on April 5 : “Macron is a political Trump’s puppet against Venezuela”, and add that Macron is destroying France: “Macron was made head of France to act as a hitman, Macron is a hitman of the financial oligarchy in charge to destroy the social rights of French people.”

In this context, since 2015 there is a mass exodus Venezuela population, which trend is dramatically increasing, to such an extent that IOM talking about a real migration crisis with approximately 1, 6 million Venezuelan emigrants in 2017, even if the head of State Nicolás Maduro strongly contests this reality. However, Colombia registered 600,000 migrants in 2017 from Venezuela, also a crossing point to other Latin American countries. These are substantial figures when you consider that the Bolivarian Republic of Venezuela has 31 million inhabitants, when you consider also that the Venezuelan State delivers very few passport applications since crisis (moreover, obtaining the passport has become so expensive because of hyperinflation, thus the price alone represents an insurmountable obstacle for many, just as the economic means to organize the transportation). 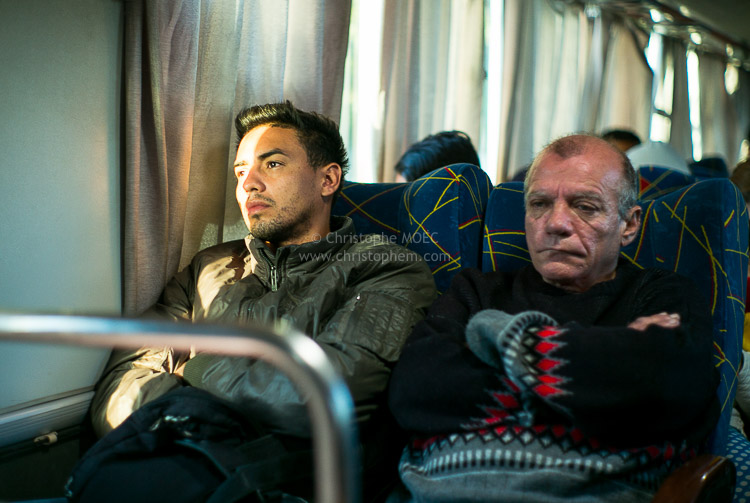 Map of Venezuelan emigration and exodus from venezuela in 2017: 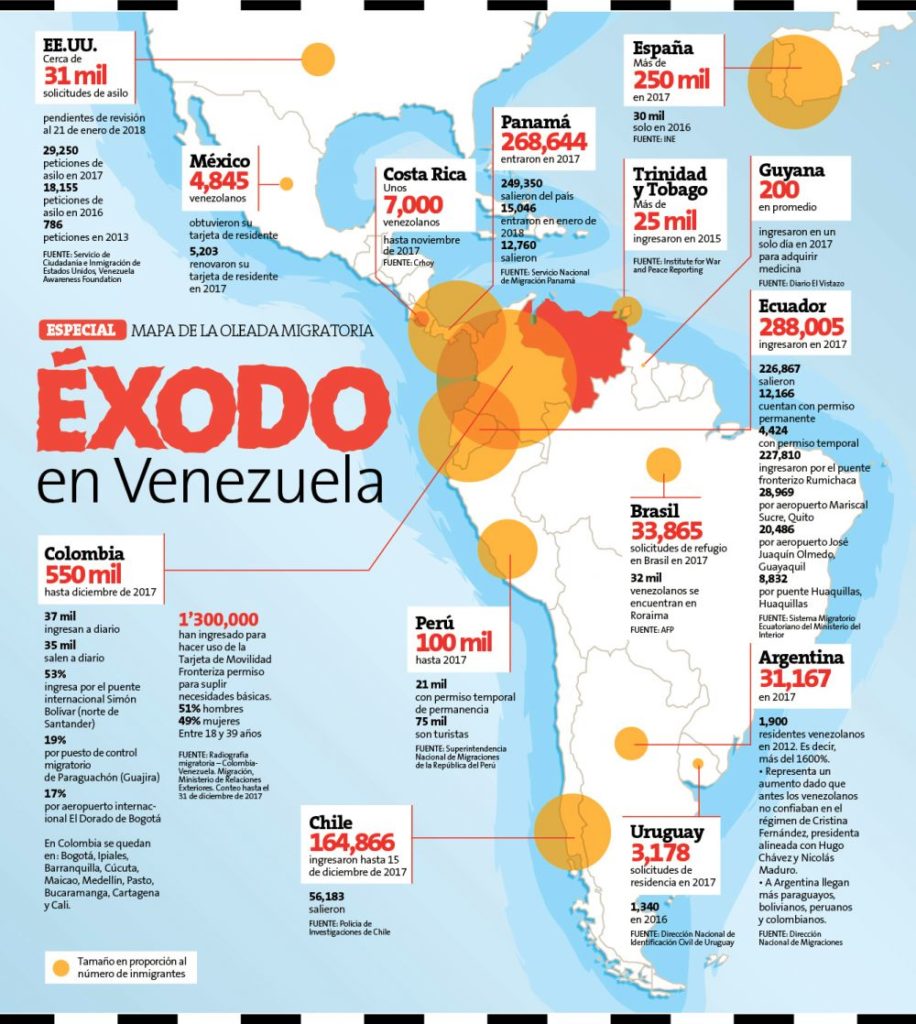 Macron describes Maduro’s government as a “dictatorship”, in newspaper El Periódico de Monagas with Maturín as its capital, Venezuela, on August 30, 2017: 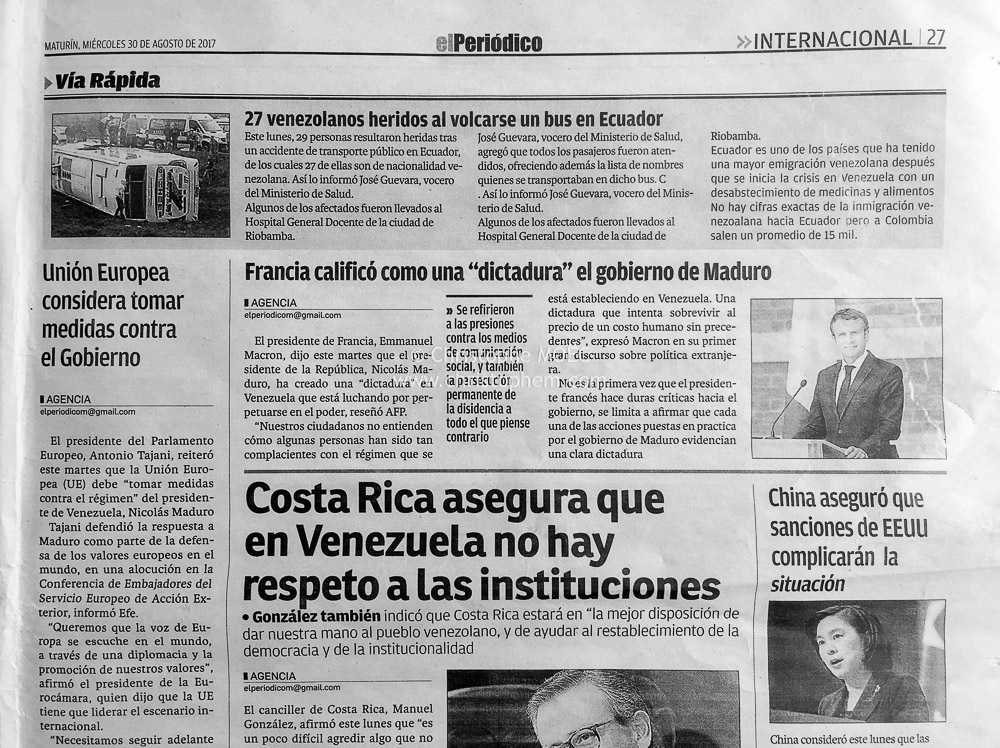 Two robbers (probably a father and his son) who were committing a robbery in a house were captured by the community of Punta de Mata, then they were lynched on the spot, then executed and finally burned, newspaper Periódico de Monagas with Maturín as its capital, Venezuela, on August 25, 2017: